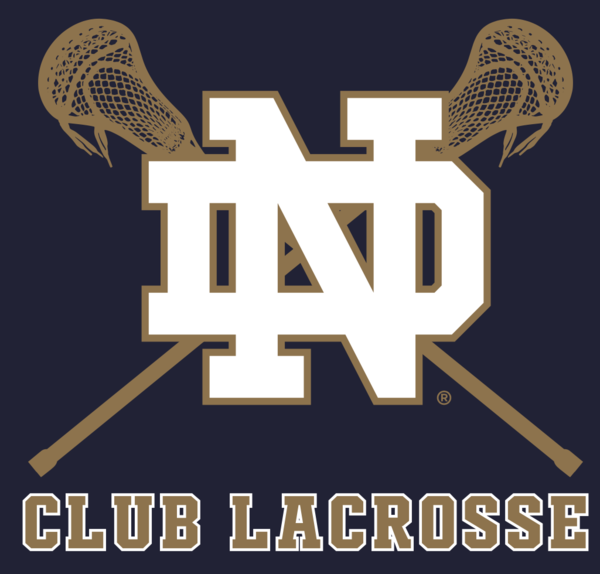 The University of Notre Dame Men's Club Lacrosse team was founded in 2012 by Connor Stacy and Andrew Kuhn.  Since 2012, the Club has expanded from one team to two, with over 60 players for the 2018-2019 season.  Each year we travel in both the fall and spring semesters to compete against top schools in the Midwest such as Michigan, Ohio State, and Wisconsin.  Since joining the Great Lakes Lacrosse League for the 2013 season, we have won the championship four times.

2018-2019 was a great year for club lax, with over 50 active members for the spring season despite a large percentage of our juniors spending the spring semester abroad. The teams were split once again, with co-presidents Michael McFarland and Andrew Weigman captaining the ND Gold team. Kevin Sohr and Andrew Abbattista, who were high school linemates, led the ND Blue team together. Every scrimmage between the two teams was extremely competitive, and truly showcased the high level of skill that our program has. While there was some discussion to join a national league in addition to our current league, funding and university restrictions prevented us from joining for the 2019 Spring season.

To shake off the rust, we hosted a fall tournament with games against Michigan and DePaul.  Weekly scrimmages paid off for the ND Gold squad led by McFarland and Weigman as they trounced DePaul 11-6 in a highly psychical contest. Having long, smart offensive possessions was the major key in the victory. ND Gold followed up the victory against DePaul with a 7-6 victory against the Michigan Wolverines.  ND Blue struggled to find their offense against Michigan, with many costly turnovers coming in unsettled play. The boys turned it around in the second game, playing much better in a tie against DePaul.  High tempo practices continued into the winter months before moving inside to Loftus due to the snow.

Unlike last season, the team was unable to travel to the Midwestern Invitational Lacrosse Festival in Columbus as it fell conveniently on April 20th, part of Easter weekend. Instead, the season opened with a day tournament at Michigan. ND Blue won both games, defeating MSU 6-5 and Michigan 8-4. Junior attackman Nick Lucci had 4 goals and 5 assists on the day. Goalie Will Andrews came up clutch at the end of both games to seal the victory. ND Gold defeated MSU 6-2 and tied Michigan 3-3. Noah Martin and Shane Johnson played well throughout both games.

One week later, the teams hosted games against local rival Holy Cross and Mankato State University. Despite the chilly weather, both teams played well and ended up 2-0 on the day. Senior Lukas Cepkauskas led both teams in scoring with a 3 goal and 1 assist performance against Mankato. Following the games, our teams celebrated the victories with a post-win meal at Kevin Sohr and Lukas's house.

In early April, the teams traveled to Northern Illinois University for games against DePaul and Marquette. Both teams were slated to play against Northwestern but they unfortunately did not show up. In their game against DePaul, ND Blue only suited up 13 players. Despite the low subs, the team played a smart, low-tempo game that enabled them to work their matchups and take high percentage shots. Strong performances were turned in by Luke McMahon, John Hlavin, and Greg Bullen in the 5-3 win. ND Gold, also playing with low numbers, defeated Marquette 6-3.

The teams traveled to Madison for the championship weekend in April. Temperatures hovered in the 40s the entire weekend, making it the coldest championship weekend in recent history. In the opening game, ND Gold came out firing against Iowa, winning the game 11-6. Due to some unfortunate seeding, the undefeated ND Blue squad had to play Northwestern in the opening round. Northwestern executed well from behind using a two-man game. Kevin Sohr and Conor McDonough led the way for the team on offense each scoring two goals each. Northwestern scored with 20 seconds to go and held on to their lead to win the game 5-4, putting the top-seeded ND Blue into the losers bracket.

Northwestern followed up their strong performance with a 7-2 win against ND Gold. Captains Michael McFarland and Andrew Weigman each had a goal in the defeat. Despite the loss to Northwestern, ND Blue dug in for their game against Iowa. Nick Lucci dominated from attack with a 5 goal affair. Tyler Dann also scored his first collegiate goal!